Judge Dean Wayne Daly on Wednesday (Jan 20) struck out the petition by Jivol @ Edmund Doudilim during an online hearing on the grounds that the latter had no legal standing to file the case due to his bankruptcy status.

He ordered Doudilim, who did not obtain consent from the Insolvency Department to file this petition, to pay RM20,000 each in costs to Awang Ahmad and the Election Commission, who were named as the first and third respondents in the petition.

The petitioner also named the returning officer as the second respondent.

Earlier, EC lawyer Senior Federal Counsel Azizan Md Arshad told the court that the second respondent raised the objection against Doudilim's petition, saying the latter had not obtained a sanction to file this action.

Prior to this, Doudilim was disqualified as a candidate for the Petagas seat during nomination day last September after he was found to be a bankrupt.

He then lodged a police report and issued a media statement, saying he was not a bankrupt and that there was "highly suspicious" information on his financial status search certificate that led to his disqualification as a candidate by the EC.

His lead counsel, Benjamin Chin, argued that the petition and affidavit of service were not filed by an advocate appointed under the election petition rules, but by a law firm.

Among their other grounds of argument was that Doudilim had named Awang Ahmad Sah Sahari as the first respondent in his petition, which was not the name of the candidate duly returned and elected in the polls.

The Warisan candidate contested under the name Awang Ahmad Sah in the Sept 26 Sabah elections.

On Tuesday (Jan 19), the Election Court also struck out an election petition filed by Barisan Nasional's Chaya Sulaiman for the Kukusan state seat, which was won by Warisan's Rina Jainal with a majority of 10 votes.

Among the grounds for dismissal was that there were some items in the petition that did not meet the requirements of the court. 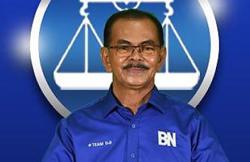