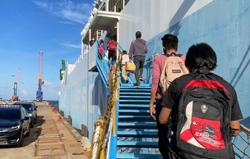 Melaka Tourism Business Club (MTBC) vice-chairman Dennis Samford handing over a laptop and a one-year subscription of The Star to 11-year-old Daryl Leong.

MELAKA: Melaka tourism players have voiced concern over claims about unrestricted movement of undocumented migrants under the Immigration Department's repatriation and recalibration plan during the current movement control order.

"Those in the local tourism industry are concerned over the entry of these migrants to get their permits and this might further increase cases of Covid-19 here.

"Looking at the trend, cases in Melaka had allegedly surged after the recalibration plan was introduced in last December," he said after handing over a laptop and a one-year subscription of The Star to 11-year-old Daryl Leong from Tanjung Minyak here to enable the Primary Five student to attend online studies during the pandemic on Tuesday (Jan 19).

MTBC is aiding children of hawkers from tourism hotspots who are affected by the pandemic in providing laptops and complimentary subscriptions of The Star.

Samford said tourism players are worried that MCO 2.0 would be extended beyond Jan 26 if there is no control of undocumented migrants entering the state.

"Many of us are facing hardship and it would turn worse if the MCO is extended," he said.

The labour recalibration and repatriation recalibration plan was introduced in November last year as an initiative to reduce the number of undocumented foreigners in the country.

Meanwhile, Melaka Chief Minister Datuk Seri Sulaiman Md Ali said he would look into the claims as the state hopes to accelerate the recovery of the economy and tourism industry as soon as possible. 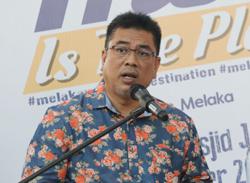