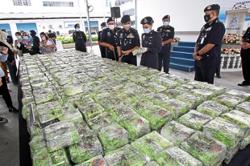 KOTA KINABALU: A 16-year-old was among five people arrested after they were caught trying to smuggle 20.79kg of syabu worth RM1.5mil from the state.

Tawau OCPD Asst Comm Peter Umbuas said the five were aged 16 to 55 and had attempted to smuggle the drugs from the district from a plantation at Mile 10, Jalan Apas in Tawau.

He said the five, including two women, were moving in separate vehicles when they were stopped by police at about 8pm on Thursday (Jan 14) and added that they found a black bag containing 25 packets of syabu and a second bag with one packet of syabu.

He said based on initial investigations, police believe that the suspects were trying to smuggle the drugs to a neighbouring country.

ACP Peter said all five did not have previous criminal records and were not addicts.

In a separate matter, ACP Peter said that all residents living in Kalabakan, Merotai and Bombalai in the Tawau district need to get permission letters from the police if they wanted to go into Tawau town.

He said the measure was in line with the 10km limit outlined under the standard operating procedure (SOP) by the National Security Council under the current movement control order.

He said that police stations in the respective areas are prepared to assist people requiring to apply for a permit to go into town.