KUCHING: Police are investigating the alleged rape of a 16-year-old girl by a male detainee while being held at the Miri police station lockup on Jan 9.

Sarawak police commissioner Comm Datuk Aidi Ismail said the investigation by the state police headquarters and Miri district police was expected to be completed this week.

He said police were looking into possible lapses and non-compliance with regulations that led to the occurrence of the alleged incident.

"I have instructed my deputy Datuk Fisol Salleh to coordinate the investigation. Insyaallah, by this week we will wrap it up," he told reporters at state police headquarters here on Monday (Jan 18).

Two police personnel on duty at the time of the incident have been suspended pending the completion of the investigation.

On Saturday (Jan 16), the underage girl lodged a report claiming that she was raped while being detained in the lockup.

She had earlier been arrested for alleged involvement in illegal online gambling activities.

Comm Aidi said that the police would address various issues surrounding the incident, including compliance with lockup regulations.

"We are looking into all these matters and we will announce the results of the investigation as well as the actions to be taken if there has been non-compliance or negligence at the Miri lockup," he said.

Asked if there was any CCTV recording, Comm Aidi said the CCTV at the Miri lockup only displays footage in real time and does not record anything.

"I have directed the investigating team to also look into this. The alleged rape case occurred in the toilet where there is no CCTV, but I will make sure that this matter is investigated," he said. 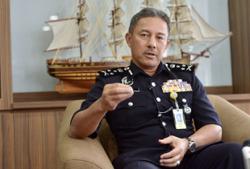