Nature haven: The application to have Penang Hill and its surrounding areas listed as a Unesco biosphere reserve was submitted last year and could become a reality this year.

GEORGE TOWN: The Unesco listing of the Penang Hill Biosphere Reserve could become a reality this year.

This came about after four years of meticulous research and a tedious submission process, he said.

“The assessment of the application is said to take about one year. They usually meet in the first half of the year.

“We are keeping tabs on the progress, ” he said.

He said the application came under Unesco’s Programme on Man and the Biosphere (MAB).

According to Unesco, biosphere reserves are areas of terrestrial, marine and coastal ecosystems or a combination thereof which are internationally recognised within the MAB framework.

MAB is an inter-governmental scientific programme that aims to promote innovative approaches to reconcile the conservation of biodiversity with its sustainable use.

Cheok said the significance of biosphere reserve would be larger than its contribution to tourism.

“It is important from the education and tourism standpoint.

“Awareness of the biodiversity of the hills in Penang is important as there is research that can be carried out here and new species to be discovered.

“Penang Hill is an ideal place for research activities. We have good universities on the island which we should leverage.

“With this recognition, more people will understand biodiversity, which will create awareness of the importance of conservation and preservation.

“We are committed to the preservation of nature and the heritage of Penang Hill through conservation education, ecotourism and green practices for future generations, ” he said.

The proposed Unesco biosphere reserve will encompass 20% of Penang island, equivalent to 12,481ha.

Penang Tourist Guides Association vice-president Clement Liang said since the state has its Unesco heritage recognition, it is time to have Penang’s nature reserves recognised.

“The next step should be putting our nature and forests on the world map.

“We have a beautiful tropical forest and it needs to be preserved, ” he said.

Liang said the state should also look into the cemeteries here.

“We have many historically significant cemeteries like the Penang Jewish Cemetery (Armenian and Iranian Jewish) in Jalan Zainal Abidin and the Japanese cemetery in Jalan P. Ramlee.

“It would be great if our cemeteries were recognised for their heritage.

“The ones at the Unesco site are preserved and recognised, but there are also others.

On the dying trades in Penang, Liang noted that the community must be encouraged to take over and learn these skills.

His son, however, has learnt the art and has vowed to keep it alive. 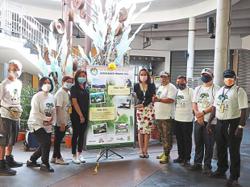