MELAKA: Melaka police have foiled an attempt to smuggle drugs through lorong tikus (illegal routes) during the movement control order.

It is learned that the drug supply was obtained from a neighbouring country before being smuggled into the state.

DCP Abdul Majid said the first arrest was that of a 39-year-old suspect on Jan 14.

He said the arrest was made at 7.05pm at Jalan Lereh, Tanjung Kling here.

DCP Abdul Majid said that the subsequent interrogation of the first suspect led to the arrest of his 37-year-old cousin in Selangor on Jan 17.

He said the two are currently being remanded to assist investigations under the Dangerous Drugs Act 1952. 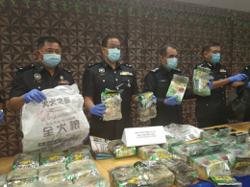