Speaking on Monday (Jan 18) after visiting flood-hit areas in the Kota Belud district, he said widening and dredging rivers would be among the solutions to flash floods.

He said dredging to deepen rivers, particularly at Kuala Abai, have been identified as one of the things that need to be done to address flash flooding in the district.

Hajiji said the shallow river mouth is one of the reasons behind the frequent flooding in the district.

"We will give the sand dredging contract to credible and capable local contractors that will be done as a joint-venture effort with state government-linked companies," he said.

Hajiji, who visited flood victims at the temporary shelter in Dewan Tun Said Keruak in Kota Belud, gave the assurance that the state government was also looking at other ways to address the problem.

"We will find the best (solutions)," he said, adding that the Kota Belud flooding became common after the Mount Kinabalu earthquake a few years ago.

So far, 240 people from 38 villages have been evacuated to the five temporary shelters at Dewan Tun Said Keruak in Kota Belud following flooding at their villages.

Sabah remains on alert to more flooding as bad weather is expected to continue for the next 24 to 46 hours.

Hajiji handed food and cash as assistance to the victims and advised people to take extra precautions in view of the ongoing bad weather, particularly those in low lying and flood-prone areas.

Kota Belud was among nine districts in Sabah hit by floods following non-stop heavy rain over the weekend that sent some 800 people to relief centres in nine districts.

Roads were also damaged by landslides, with 11 key roads in some districts impassable to light traffic. 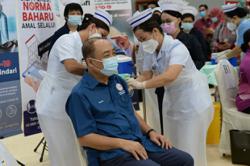