IPOH (Bernama): A young male elephant was found dead by the roadside at KM11 of the Gerik-Jeli stretch of the East-West Highway, believed to have been hit by a heavy vehicle, early Sunday (Jan 17) morning.

Perak Wildlife and National Parks Department (Perhilitan) director Yusoff Shariff said it was suspected that the elephant, believed to be between four and five years in age, was hit by a lorry or bus at about 5am Sunday.

"However, no one has come forward to claim responsibility for the incident. Based on the impact at the location, the 650kg calf was believed to have been in a herd of between 10 and 14 elephants, ” he told Bernama here Monday (Jan 18).

Yusoff also advised road users to be more careful and considerate when passing through the forest highways, especially at Jalan Raya Timur Barat which is known to be a habitat and elephant path.

He said the herd was likely to attack if threatened, especially if there is a calf among them.

"We have also installed several warning signs along the road, ” he said. - Bernama 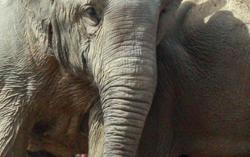