KUALA LUMPUR: All measures taken in the nation's war against drugs should be reviewed as the war is yet to be won, says Tan Sri Lee Lam Thye.

The Alliance for Safe Community chairman said the government has been proclaiming drugs as the number one public enemy in the country since the 1980s, and until today, it remains the same with no sign of relenting.

"Our failure in winning the war against drugs is a timely reminder that we must rethink and review all the measures taken so far to address this major social and security issue in the country.

"The issue is of utmost concern and must be viewed seriously by all the authorities involved with the involvement of various segment of the society," he said in a statement on Saturday (Jan 16).

Lee said efforts to eradicate drugs were unsuccessful, despite setting the target to make Malaysia free from illegal drugs in 2015 and having spent hundreds of millions of ringgit so far to tackle the social menace.

"Although we have successfully won the war against communist insurgents, it seems that we are facing an uphill battle to free Malaysia from the drug menace.

"Unlike the use of traditional drugs such as heroin and morphine in the past, the authorities now must also pay special attention to curbing the abuse of amphetamine-type stimulants (ATS), also known as designer or synthetic drugs.

"ATS are stimulant drugs such as methamphetamine, ecstasy and syabu, which are widely used at night clubs and entertainment centres to provide a ‘high’ for users," he added.

Lee said the fact that more and more new synthetic drugs have been introduced shows that drug manufacturers and syndicates are becoming more innovative and creative to attract as many new users as they could.

"It has been reported that the new psychoactive substances can produce more dangerous hallucinations with those consuming them could become extraordinarily active, aggressive and mentally unsound.”

The government must revisit the various legislations with the view towards beefing up such legislation to combat this problem, he added.

There is also a need to study why the death sentence for those convicted of drug trafficking under Section 39B of the Dangerous Drugs Act 1952 fails to deter drug trafficking activities as frequently uncovered by the police and the Customs Department at our international airports, he added.

"Drug pushers easily tempt the young by giving them sweets laced with drugs while designer drugs are also easily available.

"Since synthetic drugs can now be produced by just learning it on the Internet, they must be addressed through close collaboration of various government agencies, non-governmental organisations (NGOs) and experts who have skills in related fields," he said.

"However, a policy will remain a policy and its success depends strictly on its implementation on the ground with the participation of all segments of society.

"The government should proceed with its idea to adopt the National Blue Ocean Strategy to implement the strategic plan by combining eight ministries, agencies and NGO.

"We also need to have sustained and high impact campaigns and not seasonable ones to fight drug abuse," he added.

Anti-drug campaigns, Lee said should be carried out at the national, state and district levels involving all government agencies, NGOs, employers, employees, schools and parents to instil awareness among Malaysians, especially the youths on the consequences of drug abuse. 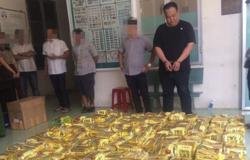