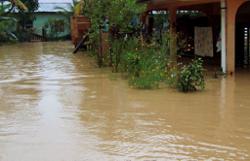 KOTA KINABALU: Food rations are being rushed to some 3,000 villagers in Pitas after all links to the main road were cut off by floods, landslips and damaged bridges caused by Monday’s heavy rain.

According to Pitas assemblyman Datuk Seri Rudy Awah, police helicopters and boats were mobilised to deliver food baskets to the stranded victims since early this week.

“Right now, we are sending food supplies to those affected.

“For those who can still be reached by road, supplies are being sent using four-wheel drives, ” he said when contacted yesterday.

The northern Pitas and Kudat districts were hit by severe flooding that caused landslips and bridges to collapse, cutting access to remote villagers about 300km from the state capital.

“Most of Pitas is affected, ” Rudy said.

A bridge collapse in Kampung Gumpa in Pitas affected links to more than 10 villages, reports say.

As of Thursday, some villagers said they were rationing their food as flood waters did not show signs of receding in Pitas district, one of Sabah’s poorest areas.

Allysin Motibin from Kampung Liu, one of the affected villages, said they were hoping for food rations to arrive soon as the only sundry shop in their area was also hit by floods.

“Many villagers are experiencing dwindling food supplies, ” he said on Thursday, explaining why they needed to consume their remaining food carefully.

Fauziah Stephens, coordinator of a local NGO called Reach Out, said they hoped to bring supplies to the people by Monday.

The Public Works Department has been directed by Deputy Chief Minister Datuk Seri Bung Moktar Radin to repair affected bridges and roads as soon as possible.

Although weather conditions improved slightly yesterday, many villages remain inundated and victims are still staying with their relatives.

Some 180 people from 47 villages are putting up in three evacuation centres in Pitas.

Another 500 or so are staying in four evacuation centres in Kudat as of yesterday.