KOTA KINABALU: The Sabah government has ordered all plantation companies in the state to screen their workers for Covid-19 after two new clusters involving estates were detected on Friday (Jan 15).

"Sabah's positive cases recorded today was higher at 514 due to mass screenings by plantation management through Perkeso at these two estates.

"The screenings there will continue so while we hope there are no more close contact infections, we might expect more cases in several days.

"The new clusters at the two estates speak volumes for the management to screen all their staff and workers.

"Secondly, the state government has directed all plantation owners to provide health facilities at low-risk quarantine and treatment centres at their plantations, as their social responsibility for the welfare of the workers," he said in a virtual press conference to update Covid-19 developments in the state.

On screening expenses, Masidi said the state government expects those who are covered by Socso to go through that option, with the respective plantation management to bear the costs.

Asked what action could be taken against any companies that do not follow the directive, he said at the moment, the state government was not looking at punitive action yet.

"It is a financial burden (to plantation owners) to some extent, but they must remember it is their businesses facing the risk. It is for the best interests of everyone that no workers are infected.

"Our intention is not to penalise but a collective effort to combat the bigger problem, which is the pandemic," said Masidi.

Commenting on hygiene issues of a quarantine centre in Likas which went viral recently, he said the matter has been taken care of.

"If they are dirty, it is incumbent on authorities to take action, and they have.

"The issue has been amicably settled," he said, referring to a Facebook post of occupants cleaning up the toilets and bathrooms at the quarantine centre due to poor sanitary conditions.

It was reported that health officials acted on the matter following the complaint earlier this week.

He said this needed to be reconsidered in rural areas where people need to travel further to get essentials.

"It is up to the police discretion to allow or not, they would know, the 10km is just a guideline," he added. 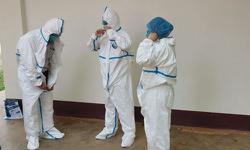