MCA relief squad on the ground to help victims She said the CRSM had engaged in disaster relief since the monsoon started.

“More than 500 volunteers have been mobilised across the country and some RM200,000 worth of goods have been handed to flood victims, ” Lim said in a statement.

Besides distributing dry foodstuff, anti-Covid-19 pandemic supplies and others, she said the volunteers also assisted in relocation, including clean-up works and post-disaster reconstruction.

She said the CRSM was liaising with authorities and local volunteers to carry out the relief work.

“Besides battling Covid-19, the government cannot ignore the spread of other infectious diseases which may occur after floods subside, such as dengue fever and cholera.”

“Anyone can become a hero in Malaysia. I hope more people will take part in this event to fulfil the mission of #BeMYHero and display our love and support for Malaysia, ” Lim said.

She added that those seeking more details on the donation could visit www.gocare.org.my.

The ongoing monsoon season has resulted in serious flooding in several states in the country. 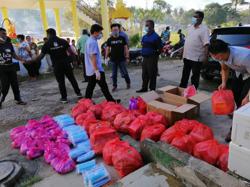