KOTA KINABALU: Food rations are being rushed to some 3,000 villagers in Pitas after the main road links were cut off by floods, landslips and damaged bridges following heavy rainfall on Monday (Jan 11).

"We are already sending out the food supplies. For villages that can be reached by road, the aid will be distributed using four wheel drive vehicles," he said when contacted on Friday (Jan 15).

The northern Pitas and Kudat districts were badly hit by floods, causing landslips and damaging bridges that cut off road links to remote villages.

"Most of Pitas is affected," Rudy said, adding that food baskets and rations were being sent to those reachable by roads or at flood relief centres since the floods started earlier this week.

The collapse of a bridge in Kg Gumpa in Pitas has affected more than 10 villages while those in low-lying areas have been moved to higher grounds to live with other relatives.

As of Thursday (Jan 14), some villagers said they were rationing their food as floodwaters had yet to recede in Pitas, which is one of Sabah's most poorest areas.

Allysin Motibin from Kg Liu said he and his family members were hoping for food rations to reach them soon as the only small sundry shop in their area was also hit by floods.

"Food supplies are running out fast," he said.

Local non-governmental organisation Reach Out coordinator Fauziah Stephens said they hoped to bring in supplies to the villagers as soon as possible.

Though the weather condition has improved slightly for now, many villages remain flooded, forcing the villagers to seek temporary shelter elsewhere.

As of Friday (Jan 15), some 180 people from 47 villages were seeking temporary shelter in three flood relief centres in Pitas while another 500 villagers at four centres in Kudat. 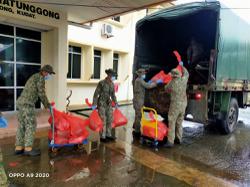