SIBU: Residents here are not taking any chances with Covid-19.

Most people have refrained from dining out where possible, as Sibu Coffeeshop and Restaurant Owners Association can attest to.

Its chairman Tong Ing Kok estimated that there had been a 50% drop in patrons at coffeeshops compared to a week ago.

“People are scared to eat out now after the case of a female superspreader which led to the Pasai cluster, ” he said.

The cluster, which involved Sibu and Kanowit, started with a patient who tested positive after a screening on Jan 7.

The 32-year-old woman came back from Johor on Dec 29 after attending her father’s funeral.

As of yesterday, the cluster had recorded 272 infections.

“People now prefer not to go out unnecessarily for fear of being infected, ” Tong said.

Due to the outbreak, the free screening conducted by the Sibu Health Department at the foyer of Sibu Indoor Stadium starting

The screening from 9am to 6pm daily will take place until further notice by the Sibu Disaster Management Committee.

Chan Ming Sung, 56, who is unemployed, was among the thousands who seized the opportunity to get tested for Covid-19.

“I took my first Covid-19 swab test last Saturday at a private medical specialist centre, which cost me RM170.

“Though the result came back negative, I decided to take another test. At least I can feel at ease, ” he said.

Chan, who came with his wife, said although he had not travelled out of town for almost a year now, it was important to get tested.

A taxi driver, who only gave his name as Wong, said it took almost two hours for his turn.

“Due to the nature of my job – going to many places and ferrying a number of passengers – I felt it was better to come here for a check, ” said the 65-year-old. 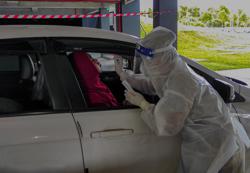