KL courts quiet due to MCO

KUALA LUMPUR (Bernama): The situation at the main entrance to the Kuala Lumpur Court here, which is usually busy, was quiet following the government's order to re-enforce the movement control order starting Wednesday (Jan 13) to curb the spread of Covid-19.

Checks by Bernama at the court complex today found that only a few vehicles carrying judges, magistrates and deputy public prosecutors on duty would be allowed through the gates during the two-week order period.

According to a court personnel on duty there today, only a few court rooms, including one session court room and two magistrate's court rooms are open for mention of new cases.

"The media and the public are not allowed to enter. Only the court staff and lawyers involved in the new cases set for mention are allowed in," she told Bernama.

The situation at the Ampang, Petaling Jaya and Selayang Courts was different, with members of the media allowed to enter, but with their face mask on and to comply with the stipulated standard operating procedures, namely to scan their body temperature before entering, and to maintain their physical distancing, while in the court.

According to a court officer at the Selayang Court, every person entering the court compound is required to scan the body temperature and the court's QR code, before being given a yellow sticker, with the temperature written, and allowed to enter.

Yesterday, the Office of the Federal Court's Chief Registrar, in a statement said, all hearings of criminal case in open court from today until Jan 26 have been postponed following the implementation of MCO.

However, it said the trial or hearing of civil cases in courts throughout the country could be done using online communication.

Last Monday, the government announced the implementation of MCO in six states - Penang, Selangor, Federal Territories (Kuala Lumpur, Putrajaya and Labuan), Melaka, Johor and Sabah - for a period of 14 days from Jan 13 until Jan 26.

Prime Minister Tan Sri Muhyiddin Yassin said six other states - Pahang, Perak, Negri Sembilan, Kedah, Terengganu and Kelantan were placed under the conditional MCO, and the recovery MCO be imposed in Perlis and Sarawak for the same period. - Bernama 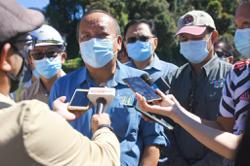