KLANG: Businesses throughout Selangor are bracing for the two weeks of movement control order (MCO) in the state which comes into force today.

Many are hoping the backlash would not take a heavy toll on the various industries.

Klang Small and Medium-Sized Enterprises Association president Foo Yen Lay said there was anticipation businesses that survived the previous MCO will collapse this time around.

"Many micro-industries will come to an abrupt halt and jobs will be lost especially because we may not be getting any aid or subsidies from the government this time around, ’’ he said.

However, Foo said his association members agreed that the MCO was necessary given the high number of cases in Selangor, especially Klang.

"There is a need for control as the people don’t seem to be able to protect themselves from getting infected and so the only solution is the implementation of the MCO by the government, ’’ said Foo.

He added although keeping businesses afloat was important, preventing unnecessary deaths as well as cutting the chain of Covid-19 infection was far more crucial.

"We can reduce the staff as well as shorten the operating hours but businesses need to make at least some money to continue surviving after the MCO, ’’ he added.

According to Ravichandran, keeping businesses open will allow them to make at least 50% of their usual sales which will help them cover costs.

"Our members are not looking at making profits but to be allowed to make what is required to pay rental, utilities and salaries.

Malay Businessmen and Industrialists Association of Malaysia (Perdasama) president Mejar (R) Datuk Abdul Rahim Saad hoped there will be some help coming forth from the government this time around as well.

"Our members have recovered a little from the last MCO and this MCO will result in them losing everything once again, ’’ said Abdul Rahim.

He said a majority of Perdasama members were suffering from severe financial losses due to the Covid-19 situation.

"But we understand the importance of the MCO to end the chain of infection as well as to upkeep national security, ’’ he added. 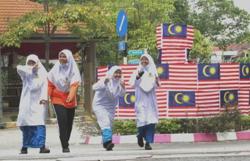