The 55-year-old man was arrested at about 8pm on Monday (Jan 11) to assist in investigations under Section 18 of the MACC 2009 Act.

It was learned that the suspect would be brought to the Johor Baru Magistrate's Court for a remand order application on Tuesday (Jan 12) morning.

The MACC had also previously arrested four other individuals, including a frozen meat importing company director in connection with the case. 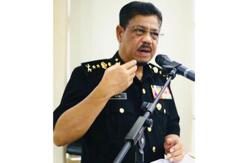