Tan Sri Muhyiddin Yassin being briefed on the programmes offered at SG Academy.

KUALA LUMPUR: A technical and vocational education training (TVET) college here which also serves as an upskilling and reskilling centre for those made jobless by the Covid-19 pandemic received a pat on the back from the Prime Minister.

Tan Sri Muhyiddin Yassin (pic) spent more than an hour being briefed on the programmes offered at SG Academy and chatting with the trainees yesterday.

Apart from offering programmes like mechatronics, drone technology and culinary arts, the academy also provides training under the National Economic Recovery Plan (Penjana) to equip the people with skills, especially those affected by the pandemic.

As of Dec 31 last year, 134,736 individuals had been approved to undergo upskilling and reskilling programmes under Penjana.

Raveendran said he signed up for the drone technology programme at SG Academy after his dismissal as a flying instructor in September last year ended a 20-year career.

“I joined the programme because it had some similarities especially in the aspect of aircraft control. And I did not expect to be offered a job at this age, ” he added.

He now serves as an academic lead for drone technology and unmanned aircraft system (UAS) at SG Academy. — Bernama 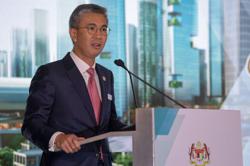