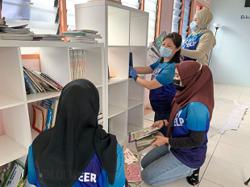 ISKANDAR PUTERI: The body of a man who went missing while fishing for crabs in Kampung Simpang Arang here has been found.

On Thursday (Jan 7), a missing persons report was lodged at 8.48am.

"His remains were found near the mangrove forest of Sungai Karang, about 2km from where his boat was spotted earlier.

"The victim is believed to have drowned," he said.

A total of 28 firemen and 30 members of the public in 20 boats assisted the search and rescue operation.

Shamsul said the victim's body was handed over to the police at the Malaysian Maritime Enforcement Agency jetty in Gelang Patah.

The victim had left his house at 7am on Wednesday (Jan 6) to look for crabs in Sungai Boh.

At around 6pm on the same day, his wife alerted other villagers when he did not return home by 2pm as he usually did.

The villagers tried looking for him but only found his empty boat.

The following morning, they sought help from the authorities to locate him.