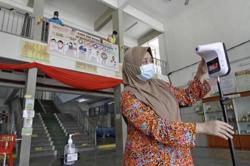 Compiled by By JO TIMBUONG, C. ARUNO and R. ARAVINTHAN

THE SPM exams for 2020, which have been postponed due to the Covid-19 pandemic, should not be cancelled, said the National Union of the Teaching Profession (NUTP), reported Sin Chew Daily.

“SPM is our country’s most important public examination. The Education Ministry should not be too hasty in changing how we award the SPM certificate as it is the start in determining a student’s future and career, ” its secretary-general Harry Tan Huat Hock was quoted in a statement.

Tan was responding to calls from DAP vice-chairperson Chong Chieng Jen to scrap the 2020 SPM exams in favour of school-based evaluation.

According to Tan, the SPM certificate is equivalent to the GCSE O-Levels qualification and is an important qualification considered when applying to universities.

“Our national union members believe that the Education Ministry will be able to use its expertise and knowledge to ensure that the SPM exams can continue to be held, ” he said.

Due to concerns over the Covid-19 pandemic, the 2020 SPM exams, which were originally supposed to be held between Nov 11 and Dec 7 in 2020, were postponed to January this year.

It was later postponed again to Feb 22 this year.

> An employee at a Chinese tech company, who is believed to have died from overworking, was revealed to be an aspiring singer, having made through several preliminary rounds in the prestigious Sing! China reality show, reports China Press.

The 22-year-old female employee, who collapsed while walking home with colleagues last week, became well-known in 2016 for her rendition of I Hate Myself For Loving You by Joan Jett & The Blackhearts on the reality singing competition.

The deceased, whose surname is Zhang, was also famous among local music circles and was nicknamed “smooth lungs” by her fans.

Zhang passed away after she collapsed on Dec 29.

Her death sparked a social media backlash against the tech firm for the relentless working hours demanded of their employees.

A hashtag about the incident drew more than 200 million views on the Twitter-like Sina Weibo service.

The so-called 996 office schedule – 9am to 9pm, six days a week, plus overtime – has spurred criticism in previous years following complaints from tech workers.

Partnering with the Henan University, they will be jointly offering a master’s degree and PhD on Chinese Kung Fu, known commonly as Wushu.

However, the news was not well-received online, with many questioning the relevance of a degree in Wushu in modern times.

Others express worry about the practicality of Wushu as an art for self-defence following a series of defeats for self-proclaimed kung fu masters when they were pitted against trained MMA fighters in recent years.

It was earlier reported that Henan University’s Wushu College, which was officially established in November 2019, reached an agreement with the Shaolin Temple to train those who showed talent in martial arts.

Since its establishment, the college has trained more than 1,000 students.

The Shaolin Temple is a Chan Buddhist temple in China’s Henan province which is believed to have been founded in the 5th century.

Shaolin Kung Fu is one of the oldest and most famous styles of kung fu in China and was first developed in the temple.