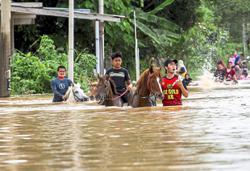 Several areas in the Kota Tinggi town are still submerged in water as of Tuesday (Jan 5). However, the water level has seemed to have drop with some areas cleared of flood completely. Some residents, including shop owners have also returned to clean their premises.— THOMAS YONG/The Star

In TERENGGANU, the number of evacuees dropped to 117 as of 3pm on Tuesday (Jan 5) from 1,074 in the morning, Bernama reports.

"However, the alert weather warning is still in effect for the other six districts, namely Setiu, Besut, Hulu Terengganu, Marang, Kuala Terengganu and Kuala Nerus," he told reporters.

Six relief centres were closed, three in Muallim, one each in Hilir Perak, Kampar and Kuala Kangsar.

The infobanjir.water.gov.my portal reported only Sungai Perak in Kampung Gajah had reached the alert level of 6.79m as of 2pm.

A spokesman for the Smart Selangor Command Centre (SSCC) said 13 victims were housed at the community hall in Kampung Alah Batu, Gedangsa in Hulu Bernam, while 55 evacuees were taking shelter at SK Rantau Panjang in Kuala Selangor.

In JOHOR, the flood situation in the state continues to improve after all victims at the relief centre in Pontian were allowed to return home.

Johor Health and Environment Committee chairman R. Vidyananthan said the number of victims in temporary shelter state-wide currently stands at 4,116 as of 7pm compared with 4,518 at 4pm.

He said four centres have been closed and there are currently 36 still open in six districts.

The number of flood-related deaths also remain at three during press time.

In PAHANG the number of victims slightly rose to 17,747 who remained at 238 relief centres in 10 districts.

ANIH Berhad, the concession holder of the East Coast Expressway Phase 1 (LPT1), said in a statement that KM84.6-KM84.7 in Lanchang towards Kuala Lumpur which had been closed since Sunday (Jan 3) night, was opened at 9am.

However, it said KM113 was still closed to all vehicles after being flooded since 9pm Monday (Jan 4). 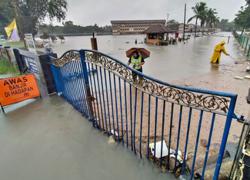 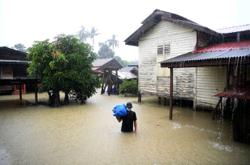