A devoted mum till the end 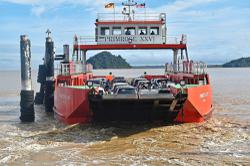 SRI AMAN: Siti Aishah Abdullah was a devoted mother who would be up and about whenever her children were sent back to school in Kuching.

And Friday turned out to be the last day that Siti Aishah, 36, performed her motherly role, as she died along with her sister and seven others after the four-wheel drive they were in veered into Sungai Batang Lupar as it was waiting for its turn to board the ferry at the Triso Ferry Point.

“My wife insisted on sending our two daughters back to their school in Kuching, ” said Mohamad Hamzah Razali.

The 43-year-old preacher said he did not expect that to be a sign that his wife would leave him forever.

Typically, Mohamad Hamzah and his late wife would be the ones sending their two daughters Khairunnisa, 14, and Nur Syuhada, 16, to school.

“However, yesterday (Friday), she insisted on being with her sister to send our daughters back to school in Kuching, ” he said when met by reporters at the Sri Aman Hospital yesterday.

Mohamad Hamzah said the last time he received a WhatsApp message from his wife was after Friday prayers, saying she was on her way to Kuching with her brother-in-law and other family members in two vehicles.

“I found out about the incident after receiving a call from my mother-in-law at 3.19pm, ” he said, adding that he accepted the incident as a test from God.

Munah Agon, 58, mother to Siti Aishah and Lorna, is still in a state of shock.

Recalling moments before the tragedy, Munah, who was travelling in another vehicle behind the 4WD her daughters were in, said she was only able to scream upon seeing the vehicle driven by Lorna plunging into the river.

“I couldn’t do anything except watch the car sink before my children and grandchildren were pulled out of the river by members of the public, ” she said.

Munah said Nur Syuhada and Khairunisa were students at a religious school in Samariang, Kuching, and were expected to start their lessons next week.

“The matter was informed by Siti Aishah when she visited my house recently. Feeling a little uneasy, I decided to join them but was in another vehicle driven by my son.

“Before leaving, Siti Aishah, in a humorous tone, had also asked me to dress beautifully, ” she said.

Mohamad Hamzah said the remains of his wife and children would be buried in one grave at the Kampung Hulu Sri Aman Muslim Cemetery, while the bodies of Lorna and her two sons would be taken to Sibu after post-mortem at the Sri Aman Hospital. — Bernama 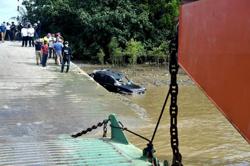