Four of the fishermen in the boat were rescued on Thursday (Dec 31) after the vessel sprang a leak.

In a statement Friday (Jan 1), Hamzah said that he had ordered search and rescue (SAR) efforts to be stepped up.

"For this purpose, all assets belonging to the Malaysian Maritime Enforcement Agency (MMEA) such as maritime ship KM Amamah, speed boat Kilat 28 and aircraft AW139 have been deployed. They will work with the Fire and Rescue Department and Marine Parks Department," he said.

On Thursday (Dec 31), the boat with five fishermen from Pasir Putih, Kelantan capsized at a location of about four nautical miles southwest of Pulau Perhentian.

The missing fisherman has been identified as Saari Salleh, according to Besut police. 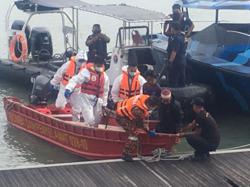