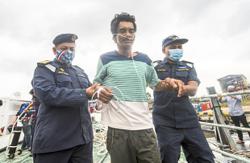 PASIR PUTEH (Bernama): "We had to swim for a good 14 hours, ” said skipper Tuan Azhar Tengku Long, one of the four fishermen rescued after their fishing boat sunk in Pulau Perhentian waters Thursday (Dec 31) evening.

Recalling their harrowing moment, Tuan Azhar said all of them jumped into the sea after their boat was hit by waves up to four metres high at about 1.30pm.

"We were then hauling the fishing nets into the boat and did not realise that the waves were getting bigger and seawater had inundated the boat interior," he said when met by reporters at the Malaysian Maritime Enforcement Agency (MMEA) Jetty, Tok Bali here on Friday (Jan 1).

The others who survived the ordeal were Tuan Azhar’s son Tuan Azrizal, 19, Mohd Azri Mohd Rasdi, 28, who are in stable condition and Norizan Yusof, 45, who was rushed to the Kuala Besut Health Centre for treatment upon arrival at the jetty.

The four from Kelantan were found on the beach near a resort on Pulau Perhentian Besar at about 8.45am on Friday.

However, another victim, Saari Saleh, 40, from Terengganu, is still missing and MMEA together with the police and other agencies have mounted a search and rescue operation.

According to Tuan Azhar, the four of them swam back towards Pulau Perhentian but Saari left the group to find his own way to safety.

"I am not sure if he has made it or not," he said while desperately hoping that Saari is safe.

Meanwhile, Saari's mother, Hurani Awang, 73, said she would continue to pray for her son’s safe return.

The boat with five fishermen is believed to have sunk in Pulau Perhentian waters off Terengganu, after being hit by strong waves during heavy rain in the 1pm incident.- Bernama