A CURRY mee stall in Penang has lodged a police report after two customers accused him online of undercooking their food after an argument, Sin Chew Daily reported.

It was reported that the customers – a brother and sister – had asked for extra curry soup but were denied by the owner of the stall in Chulia Street.

“Do you think your curry mee is tasty? We just wanted a bit more soup because the noodles were dry.

“Your meatballs and prawns were not fresh and undercooked. We feel sick after eating it. If you wish so much to be famous, I’ll make you go viral!” the customers wrote on Facebook on Dec 25.

He told the daily that on the day in question, he had enough soup for 10 more bowls of curry noodles.

“The main ingredient in the soup is santan. The cost for making our soup is several hundred ringgit.

“As our income has fallen during the pandemic, giving extra soup would mean that we end up selling one bowl less, ” he added.

He said that many years ago when his grandfather was manning the stall, he had allowed customers to have extra soup but ended up losing money.

Dong also claimed that none of his customers had fallen sick after eating at his stall.

> The daily also reported that there was a scare after an audience at the recent concerts by Malaysian singer Fish Leong in Taiwan claimed to be down with a cold.

“I’m here to spread the virus so that my cold can get better, ” wrote the man on Taiwanese social media platform Dcard on Dec 27, posting a photo of himself at the concert.

Many people in Taiwan had since taken to the Internet to condemn the man for being irresponsible.

“I’m speechless that a person could do such a reckless thing at this time, ” one wrote. 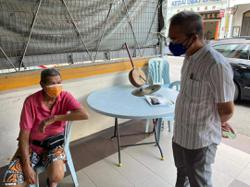 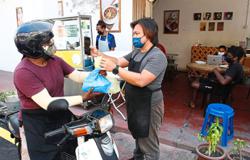