Covid-19: Only 8.5% of foreign workers have been screened under its programme between Dec 1 and 29, says Socso

PETALING JAYA: Only 8.5% of foreign workers in targeted areas have been screened for Covid-19 under its screening programme from Dec 1 to Dec 29, says Socso.

Its CEO Datuk Seri Dr Mohammed Azman Dato Aziz Mohammed said as of 12pm on Dec 29, a total of 74,482 screening tests on foreign workers were reported to have been conducted, involving 2,601 employers.

"There were 750 clinics in the six states that have registered their interests to conduct the tests under the Covid-19 Screening Programme for Foreign Workers," he said.

He urged employers to immediately send their workers for screening, instead of waiting for the last minute.

Dr Azman added that Socso has purchased Antigen Rapid Test kits (RTK-Ag) in bulk and distributed them free of charge to healthcare facilities to help lower the cost of screening for foreign workers.

"Socso had already purchased nearly a million test kits, sufficient to cover the number of foreign workers registered with the organisation in the six states that were initially announced by the government, namely Federal Territory of Kuala Lumpur, Selangor, Negri Sembilan, Penang, Sabah and Federal Territory of Labuan.

"Based on the current orders and requirement, a total of 311,837 test kits have been distributed by Socso, far exceeding the number of foreign workers who have been screened so far," he said.

Dr Azman noted that although Socso provides the test kits to the clinics, the cost for the services depends on the respective clinics.

"Our engagement with the relevant medical groups and the Malaysian Medical Association indicated that the current cost for such screening is now almost halved from what it was.

"Employers are free to choose which healthcare providers they prefer to undertake the screening for their foreign workers," he said, adding that Socso is open to any approach in making the screening process easier and affordable to all.

"Apart from the screening assistance by Socso, the enforcement activities that would start on Jan 1,2021, will be spearheaded by the Department of Labour, with the involvement of the Department of Occupational Safety and Health," he said.

Socso has also urged employers to get in touch with participating clinics to book for appointments to screen their foreign workers as soon as possible.

"Only by doing this together, our collaborative effort will stand a chance to curb the disease and bring back our livelihood as before," he said, noting that the employer's role is as important as the government's in managing diseases at the workplace.

Further information on the Covid-19 Screening Programme for Foreign Workers by Socso can be obtained at PSP Portal (https://psp.perkeso.gov.my) or Socso's website (www.perkeso.gov.my). 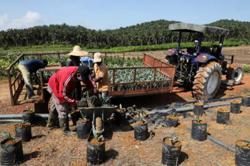