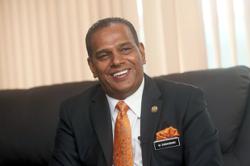 PETALING JAYA: With the Covid-19 screening being mandatory for all foreign workers, employers are urging the government to control the service fee imposed by clinics and hospitals for tests.

“Prices have gone up now that it’s mandatory to test all foreign workers. With such a demand, businessmen take the opportunity to increase prices.

“The government should set price control to prevent unnecessary rush or profiteering, ” he said in an interview.

Soam said RTK that used to cost between RM50 and RM60 several months ago was now priced RM100 to RM120.

There are also calls for the government to absorb the service fee since the Antigen Rapid Test Kit (RTK) is subsidised for foreign workers who contribute to Socso.

Only about 50% employers of foreign workers in construction contribute to Socso as of now, he said, so cost was an important factor because periodic screening for workers should be considered as the mandatory test was only one time.

“Come new year, more employers will register and contribute to Socso for their foreign workers.

“If the government wants to make the test mandatory, then they should control the price and service fee.

“We can let businesses make some profit but don’t create unnecessary rush that leads to price increase and shortage. It has to be fair and a balance must be there for all parties, ” he added.

On Dec 1, Socso reportedly said it would provide RTK test kits for about 900,000 foreign workers, who are contributors to the body, for the Covid-19 screening programme.

It said panel clinics or hospitals registered under the programme were free to determine their service fees.

From Jan 1 this year, it is mandatory for all foreign workers to be covered by the Employment Injury Scheme (EIS) under Socso. Employers have to contribute 1.25% based on employees’ wages, subject to the threshold of RM4,000 and capped at RM49.40 per month while the foreign workers are not required to contribute to the EIS.

“The cost now varies from one panel to another. Covid-19 is recognised as an employment disease and as such Socso should bear the full cost of prevention and treatment of employees.

“It is critical for Socso to cover all costs related to the virus’ prevention and treatment of employees as most employers faced financial difficulties throughout 2020, ” he said.

Shamsuddin noted that the low number of foreign workers being tested was due to hitches in the supply of the test kits to the panels.

Weighing in, Federation of Malaysian Manufacturers president Tan Sri Soh Thian Lai said the service fee was not fixed and some clinics or hospitals would set the price based on the number of workers that needed to be screened by a particular employer.

“Some employers have opted to get the screening done at the clinic or hospital while the rest preferred to get it done at the factory premises to minimise disruption to operations.

“Since Socso has clarified in April that Covid-19 is recognised as an occupational disease, especially for workers who contracted the virus due to direct exposure at work and in the course of their employment, the government should also cover the service fee, ” he said, adding that it was important as most businesses were still in the recovery stage.

Based on members’ feedback, Soh said the service fee ranged between RM55 and RM80 per person with some hospitals quoting as high as RM140 to RM180 per person depending on the number of workers to be tested.

The compulsory Covid-19 screening for foreign workers that was first announced for six high-risk states – Selangor, Negri Sembilan, Penang, Sabah and the Federal Territories of Kuala Lumpur and Labuan – was recently extended to the rest of the country.

On Dec 24, he said the National Security Council would enforce the compulsory Covid-19 screening under Act 342 (the Prevention and Control of Infectious Diseases Act) beginning Jan 1 so that action could be taken against employers who refused to have their workers tested.

On Dec 21, Human Resources Minister Datuk Seri M. Saravanan said foreign workers who contributed to Socso could have their subsidised tests carried out at the appointed hospitals or clinics.

For those without coverage, the costs would be borne by their employer.

He said the enforcement on Jan 1 onwards would “only focus on the six states, while employers in the other states would have until the end of February for all their foreign workers to be tested for Covid-19”.

In a statement, Socso said it had purchased nearly a million units of RTK with 746 clinics and hospitals involved in the screening tests nationwide.

“As of Sunday, Socso had approved and distributed 273,357 units to clinics and hospitals.

“However, the number of test kits that have been utilised are only 68,460 units, ” it said, adding that the kits were supplied based on the requests made by clinics and hospitals depending on appointments requested by the employers.

Socso said its data showed only 2,385 employers sent their workers for Covid-19 screening as of Sunday, merely 4.3% of the total companies that employ foreign workers in Malaysia.