Shades of the past: One of the murals at the corner of Jalan Penjara Lama in Alor Setar.

ALOR SETAR: Lorong Setar and its surrounding areas here have been transformed into a work of art, featuring 18 murals that depict the olden days of the state and the everyday life of its people.

Among them that caught the public’s eye is the one featuring 61-year-old motorcycle foreman Low Kim Tek in the midst of repairing a Honda C50.

“The mural looks really alive and many people like it.

“Most people know the Chinese foreman in the mural is me, Ah Tek, ” said Low, who operates from a shop in Jalan Pekan Melayu.

Low said an artist named Jack approached him several weeks ago and took pictures of him repairing a motorcycle.

“He sought my permission to use those pictures to draw a mural. I agreed and he took more than a month to complete it, ” he said.

Named Alor Setar Art Corner, the mural project is part of the state’s RM528,000 rejuvenation project meant to give the city a facelift. 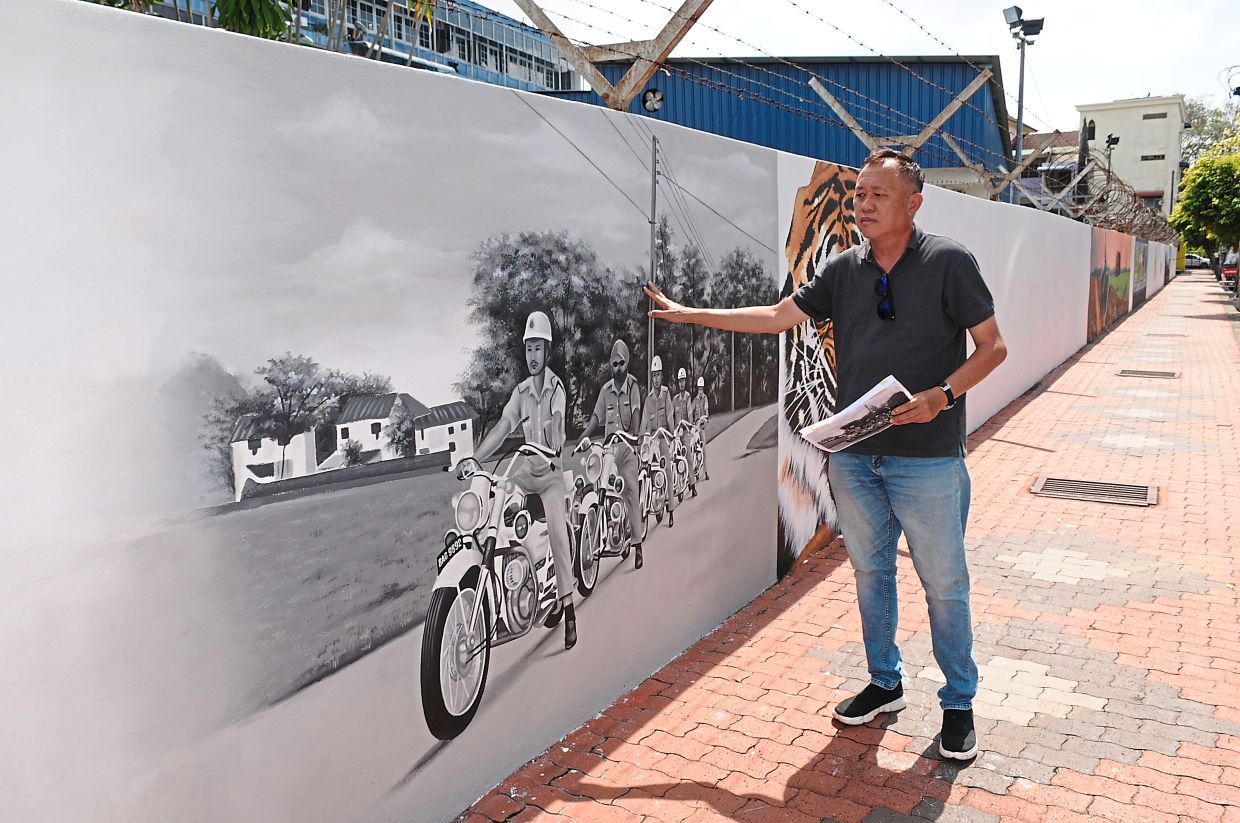 Chen showing his mural of police officers riding their motorcycles.

Artist Datuk Chen Teck Ming from Taiping said he painted murals mostly in black and white based on historical pictures obtained from museums and friends.

“The mural depicting police on high-powered motorcycles was a special request by the police.

“The ground-breaking ceremony of Terusan Wan Mat Saman in 1879 is another important mural of this project, ” said Chen.

MBAS engineer Ahmad Sujairi Md Hasan said extra street lights and CCTVs would be installed to light up the place at night and safeguard against vandalism.

“The project also includes repainting heritage buildings such as the old post office, Alor Setar police station and the shophouses in Pekan Cina and Pekan Melayu.

“We will also put up a few sculptures at the site, ” he said.

Pokok Sena Prison warden Roslina Ismail and her daughter Siti Nur Khairunnisa Mohd Tarmizi were among the those seen posing for pictures near a giant mural featuring two cats.

“The murals are very beautiful and neat. It is a very good idea to set up an art corner here.

“The locals can come to spend time with their family when they are not working, ” she said.

Siti Nur Khairunnisa said the murals featuring historical events would enable the young generation to know what happened in the past.

“The stories will then be passed on for many years, thanks to these murals, ” she said.