PETALING JAYA: Eighteen people, including the owner of an entertainment outlet, were issued with compounds for breaching the conditional movement control order (MCO).

"At the time of the raid, the customers – 13 men and 4 women – were busy partying and drinking alcoholic beverages.

"The premises owner was in violation for operating an entertainment outlet during the conditional MCO.

"The premises also did not have a licence for an entertainment outlet or selling alcoholic beverages," he said when contacted on Sunday (Dec 27).

Various items were seized including 13 bottles of liquor and audio equipment, he added.

"We will continue to conduct compliance operation inspection in the district.

"Stern action will be taken against anyone who violates the conditional MCO," ACP Nik Ezanee said. 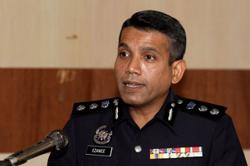