KUALA LUMPUR: Datuk Seri Tengku Adnan Tengku Mansor (pic) has been sentenced to 12 months' in jail and fined RM2mil by the High Court after he was found guilty in his RM2mil corruption case.

Justice Mohamed Zaini Mazlan, in his sentencing, said he was inclined to follow precedence in previous cases and cited the corruption case of former Selangor mentri besar, Dr Mohamad Khir Toyo who was jailed for a year.

"The accused is sentenced to 12 months and a fine of RM2mil. Any default, he would have to serve another six months. The sentence is to run from the date of judgment," he said here on Monday (Dec 21).

The judge remarked that Tengku Adnan was not the first high-ranking public servant and politician to be convicted of a crime.

"There have been others. Everyone is equal before the law. I do not doubt that he has served the country for many years but the sentence must reflect the crime and be a deterrent to others," Justice Zaini said.

Tengku Adnan's lawyer Datuk Tan Hock Chuan asked for a stay of execution on both sentences and this was allowed by the judge.

Earlier, Tan submitted that his client was a first-time offender and contributed significantly to the nation.

"He has served in the Cabinet and Parliament for a period of 17 years. The crime in this case is not a heinous one," he said during mitigation.

Tan asked the court not to impose a custodial sentence but to give a fine of less than RM2,000 in order for his client to retain his position as the Putrajaya MP.

He said the court should consider the slim majority in Parliament where the current government would be affected if the accused was disqualified from his MP position.

Justice Zaini then asked the counsel whether the court should be concerned with the political development in the country.

"The court can take judicial notice. We say that it is a factor that the court can consider. The effect is not in isolation but cumulative with others," he added.

Tan informed the court that his client has hypertension and high cholesterol and has been on medication for a long time.

"We plead for justice to be tempered with mercy that there will be no custodial sentence," he added.

Deputy Public Prosecutor Julia Ibrahim, however, objected and said that the sentence sought by the defence was inappropriate in the case.

"In the accused's own words, RM2mil is just pocket money to him. The sentence must be deterrent so that other people would not repeat it.

"The court should not be giving a fine of less than RM2,000 in a case that involves RM2mil, which is just pocket money to the accused," she said.

DPP Julia said MPs "come and go" and for every general election or a by-election, there would be changes to the seats.

Justice Zaini then asked the prosecution what was the appropriate amount for a fine, and DPP Julia said "no less than the amount which he was charged with".

She also gave an example of the corruption case of former Selangor mentri besar Dr Mohamad Khir Toyo who was sentenced to one year in jail for corruption in 2011.

Tan then stood up to reply that it was his client's age and health that concern him the most.

"My main ground for asking the court not to impose a custodial sentence is not because of the disqualification. It is his age and health," he said. 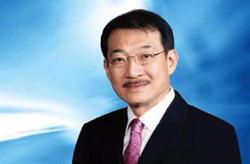