JOHOR BARU: Johor police chief Comm Datuk Ayob Khan Mydin Pitchay has become the second senior cop in the country to receive a death threat from a man claiming to have links with the Liberation of Tamil Tigers Eelam (LTTE).

“I received the threat some two weeks ago from a man who contacted my personal assistant claiming that three LTTE members from Selangor will come down here to kill me.

“The person gave detailed information about me and even knew my home address, ” he said.

Ayob Khan was speaking to reporters after representing the state police contingent receiving a certificate from the Johor Statistics Department for completing the e-Census here yesterday.

The state police have opened up investigations on the threat made against him.

They would also be working closely with their Selangor counterparts.

“I am unsure why the threat has been made as it has been more than a year since I left Bukit Aman and I do not know why this issue has resurfaced again, ” he added.

Police had earlier this month started investigating a man whom they said threatened to shoot Abdul Hamid and attack Bukit Aman and the Defence Ministry.

Bukit Aman CID director Comm Datuk Huzir Mohamed had said the police were in the midst of tracking the man down.

The case is being probed under Section 507 of the Penal Code for criminal intimidation and Section 233 of the Communications and Multimedia Act.

Police discovered that the suspect might not be sane.

The suspect would be tracked down nevertheless, Huzir said earlier.

It was reported that a man, who claimed to be the leader of LTTE 2.0, also said that he would attack Sri Lanka after the two attacks on Bukit Aman and the Defence Ministry’s headquarters. 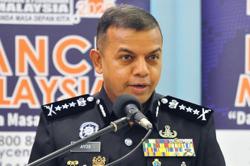