KUALA LUMPUR (Bernama): The number of flood victims in Kelantan and Terengganu has increased following continuous rain in most areas in the two states.

Kuala Krai is the second district to be affected by the floods in Kelantan following the evacuation of 90 victims to four relief centres (PPS) as at 8 am on Friday (Dec 18).

In Tanah Merah, the number of flood victims continued to increase to 39 people, comprising 12 families, compared to 18 victims last night, and out of that number, 12 of them are at PPS SK Lawang, Sk Kelewek (15) and Padang Kijang Community Hall (12).

According to the Drainage and Irrigation Department, as of 8am on Friday, the water in Sungai Golok in Rantau Panjang has exceeded the danger level at a reading of 9.01m and is rising. The danger level is 9m, while the level of the same river at the flood assessment point in Jenob, Tanah Merah, showed a reading of 22.88m, which is past the warning level of 22.5m.

The Rantau Panjang Fire and Rescue station chief Imran Ismail said the water level in Sungai Golok in Rantau Panjang is rising due to occasional heavy rain in the area.

In Terengganu, the number of flood victims continued to increase to 275 people from 81 families as of 8am on Friday, compared to 56 people from 16 families at 6pm on Thursday (Dec 17).

The fourth wave of floods that started in Kemaman on Thursday, has spread to three more districts namely Besut, Setiu and Dungun.

Head of the Secretariat of the State Disaster Management Committee, Lt Kol (PA) Che Adam A Rahman said eight PPS had been opened in the affected districts, comprising four in Kemaman, two in Setiu and one each in Besut and Dungun.

"In Kemaman, the number of victims continues to increase to 203 people from 56 families, while in Setiu, there are 31 victims from 15 families.

"In Dungun, there are 23 flood victims from four families while in Besut, there are 18 people from six families," he said, adding that intermittent rain is reported in some areas in the state.

Meanwhile, the Drainage and Irrigation Department reported the water level of Sungai Tebak at Jambatan Tebak, Kemaman, has risen to 19.20m, which is above the danger level of 18.5m, while the reading at Sungai Nerus in Kampung Langkap, Setiu, is 21.53m. The danger level is 21m.

The water in Sungai Telemong in Kuala Ping, Hulu Terengganu and Sungai Besut at Jambatan Keruak is also reported to have slightly exceeded the danger level.- Bernama 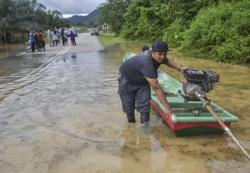 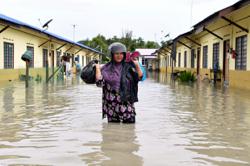