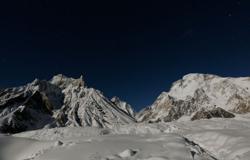 The iconic Mount Kinabalu in Sabah. - Sabah Tourism Board

KUNDASANG: The iconic Mount Kinabalu here is expected to see more climbers this month due to the festive and holiday season, says a Sabah Parks officer.

Kinabalu Park assistant manager Januarius Shaftang said they expect more visitors next week based on bookings to climb the mountain.

The mountain was reopened to climbers on Dec 7 with a permitted capacity of 100 climbers per day.

"The daily average has not reached 20 climbers since we reopened, but that is because many are still sceptical due to the pandemic.

"However, we anticipate that it will increase next week based on bookings, including in hotels and resorts in the state capital. Many may want to climb the mountain after Dec 20," he said after handing over food aid in ceremony by Sabah Malaysian Red Crescent Society (MRCS) in collaboration with Sabah Tourist Guides Association (STGA) on Thursday (Dec 17).

He said at present, only 10% of 450 mountain guides were working due to the lack of climbing activities.

Since the hilly district is known for its fertile land, some guides with land were farming on the side to earn a living, added Januarius.

At the event, food assistance sponsored by Nestle Malaysia was channelled to 300 mountain guides whose livelihoods had been affected by the pandemic.

Sabah MRCS chairman Datuk Asnan Yunus Chung said they are among the many groups helped by the society, and they would continue to provide food assistance to other vulnerable groups statewide.

On another development, Asnan said they are also continuing their blood donation drive at malls and other business premises.