GEORGE TOWN: Karpal Singh was a prominent lawyer who earned the moniker “Tiger of Jelutong”, having served as Jelutong MP for 21 years.

He was also the Bukit Gelugor MP for 10 years and was a prominent advocate for human rights.

In recognition of his services to Penang, Karpal has been posthumously bestowed the Darjah Utama Pangkuan Negeri (DUPN), which carries the title Datuk Seri Utama.

Bukit Gelugor MP Ramkarpal Singh said it is an honour for his late father to be awarded the title.

“In his lifetime, he took a stand that he would not take titles as long as he’s in politics. Now that he’s no longer here, circumstances have changed. It’s fitting that he got this honour, ” Ramkarpal said.

Also receiving the DUPN award is Public Services Commission chairman Tan Sri Zainal Rahim Seman, who is no stranger to the state.

“The new date is still subject to changes amid the Covid-19 pandemic. We only allocated two days for Darjah Kebesaran, Bintang and Pingat Kehormatan award ceremonies which are on Jan 16 and 17 in Dewan Sri Pinang.

“The ceremony on the first two days will involve 51 and 63 recipients respectively.

To ensure crowd control, only the recipient and a partner will be allowed to attend the ceremonies. 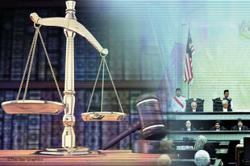