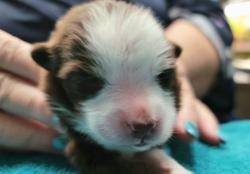 HONG KONG actor-singer Aaron Kwok risked his life to save a puppy stuck on a six-metre-high bridge while filming a movie recently, reports Sin Chew Daily.

Fans managed to film the 55-year-old perching at the edge of a bridge to get closer to the trembling pooch.

With one hand holding the handrails on the bridge and steel wires holding him, Kwok carefully scooped the puppy up to safety.

Fans were quick to praise Kwok for his actions, describing it as “heroic”.

“It’s scary enough looking at the scene unfolding, let alone being able to climb over the railing to save a dog, ” one wrote.

It was reported that Kwok was filming a scene for My Uncommon Dad in Foshan, Guangzhou, when the incident happened.

> A ride-hailing driver in Guangdong, China nearly got his driver’s licence revoked after he ran three red lights while rushing his passengers to a hospital, reported China Press.

But his passengers later refused to testify to the police on his behalf, costing him demerit points, a fine of 600 yuan (RM371) and being ordered to retake his driving exams before being allowed on the road again.

The driver, whose surname is Ai, explained that the passenger’s baby started frothing at the mouth and began losing consciousness as they got in his car on Dec 8 afternoon.

In an attempt to save the baby, Ai drove past three red lights to rush to the hospital.

After being penalised, Ai attempted to get in touch with the passengers but they refused to pick up his call and only replied with a text message saying that it was not their business that he had run afoul of the law.

“Even though I am disappointed by their actions, I still get a warm feeling in my heart for having saved the life of a small child by sending him to the hospital.

“I would do the same thing if it ever happened again, ” he said.

The Dongguan city police later told reporters that they have verified Ai’s claims via CCTV footage and records at the hospital.

> Hong Kong actor Moses Chan claimed to have rejected the advances of one of his personal assistants, reports Sin Chew Daily.

The 49-year-old, who is married with three kids, was sharing stories of personal assistants together with his colleagues on a recent episode of talk show Tiger’s Talk.

He claimed that one of his female personal assistants confessed to him after being secretly in love with him for two years.

“It was many years ago. She was working for me for two years then. I did not realise it at all when she told me. At that time, I already had a girlfriend, ” he said.

Chan rejected the personal assistant gently and she resigned soon after, he said.