A lasting and unbreakable bond 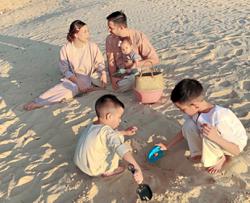 Celebrating together: Ridzuan and his wife attending the wedding of one of Ganesan’s relatives.

PETALING JAYA: Their bond did not fade away with the passage of time despite their age gap and racial differences.

The friendship between Mohamad Ridzuan Che Mohamad Zin and S. Ganesan began 13 years ago when they met at work at KTM Bhd in Pulau Mutiara, Penang.

“I had just started work. Ganesan was my senior during on-the-job training. He was always helpful and generous when it came to imparting knowledge, ” recalled Mohamad Ridzuan, 36.

“We grew closer over the years, ” he said, adding that both of their families would also meet up, usually during festive seasons.

Ridzuan said the kindness shown to him by 60-year-old Ganesan and his family had always amazed him.

“When I spent a night at their home, they prepared a sejadah (prayer mat) for me to perform my prayers.

“When I visit them during the month of Ramadan, they will cook and have the pre-dawn meal with me, ” said Ridzuan.

All of them also had buka puasa meals together, he said.

Ridzuan added that Ganesan’s family had become his adoptive family.

The retiree and his family travelled all the way from Penang to Shah Alam, Selangor, for Ridzuan’s convocation ceremony.

“Till this day, I still feel surprised and touched that my adopted family came all the way from Seberang Perai for my convocation ceremony, ” said the mechanical engineering graduate when interviewed by mStar.

Ridzuan said he had initially felt sad because his aged parents could not make it to the ceremony.

“My parents live in Kelantan and their health was not so good at the time.

“When Ganesan told me that he and his family would be there, it really touched me. I was crying inside, ” said Ridzuan, who is now married and a father of one.

Due to the Covid-19 pandemic, he was not able to visit Ganesan and his family during Deepavali last month like he had for the past 12 years.

“Otherwise, I would be there wearing a new jippa suit and catching up with Ganesan and his family, ” Ridzuan added.