COVID-19 standard operating procedure (SOP) saw a new norm in the Dewan Rakyat when three Members of Parliament, who are undergoing home quarantine, turned up fully clad in personal protective equipment (PPE) to participate in the voting process.

The three are Datuk Seri Dr Adham Baba (BN-Tenggara), Datuk Seri M. Saravanan (BN-Tapah) and P. Prabakaran (PH-Batu), who were seen seated on the highest floor of the House, away from the other MPs.

They were clad in full white aprons, along with a blue shower cap and a visor.

“It’s a new norm in the Dewan Rakyat!” said Transport Minister Datuk Seri Dr Wee Ka Siong, who posted a picture of the three on Facebook.

“The three had requested permission from the Health director-general to attend the voting session in Parliament, ” he added.

Seeing their presence, opposition leader Datuk Seri Anwar Ibrahim requested an explanation from Speaker Datuk Azhar Azizan Harun as to why the three were still allowed to enter the House while they were under a home quarantine order.

Several opposition MPs also raised concerns that the presence of the three would pose a health threat to other lawmakers. 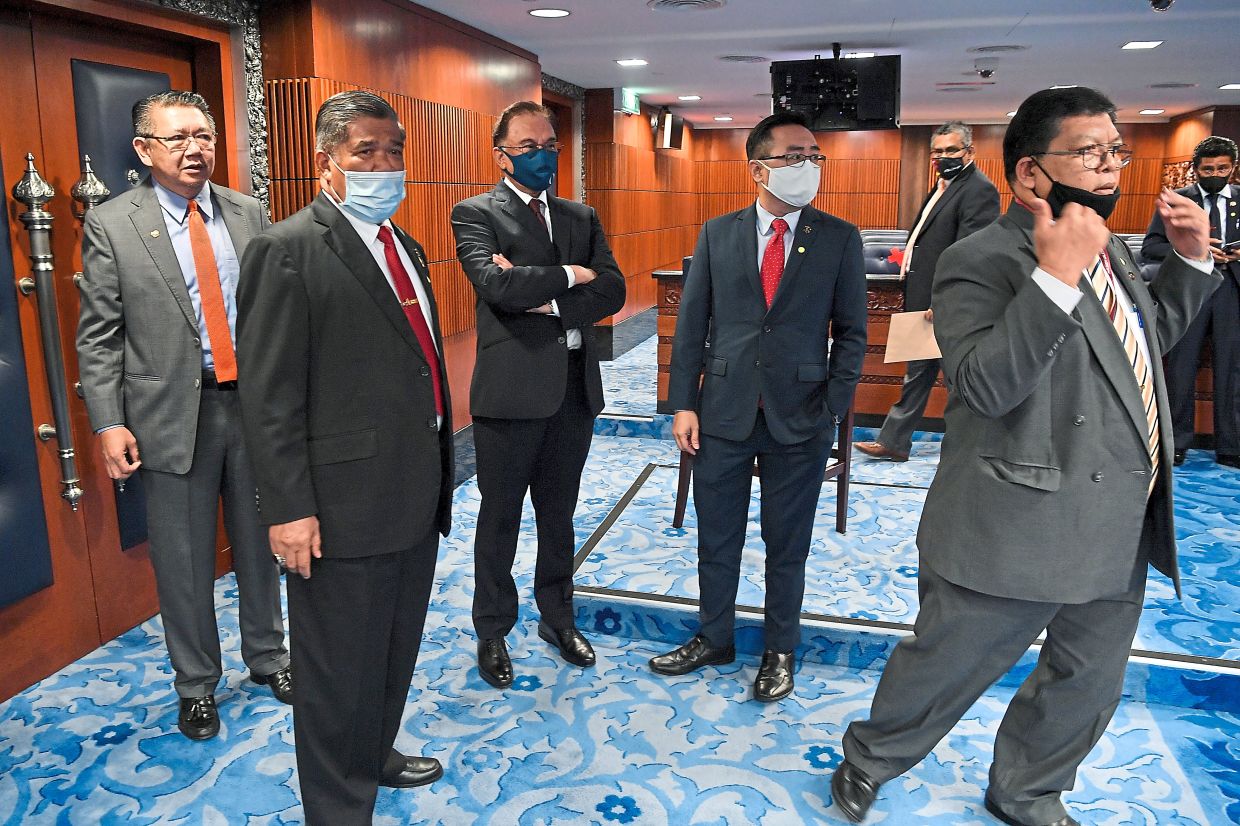 Not in favour: Anwar (third from right) and other opposition members preparing to walk out of the Dewan Rakyat due to the presence of the three MPs who were supposed to be quarantining at home. — Bernama

Azhar said the three MPs had tested negative for Covid-19, adding that a lawmaker had also come to vote last Thursday and did not follow the quarantine order.

Unsatisfied with the Speaker’s answer, the opposition bloc walked out in protest.

Azhar proceeded with the bloc voting for the Federal Territories Ministry’s budget at the committee stage, which was passed with 110 ayes and seven nays.

Separately, Minister in the Prime Minister’s Department (Law) Datuk Takiyuddin Hassan said Health director-general Tan Sri Dr Noor Hisham Abdullah had used his powers under Section 15 of Act 342 to provide special clearance for the three MPs to be present for the voting process.

“The opposition’s walkout either shows that they do not understand or they can no longer stand (proceedings), ” he said.

Datuk Johari Abdul (PH-Sungai Petani), who is PKR whip, said the opposition decided to walk out as a show of protest over the double standard rules with regard to those under Covid-19 quarantine.

“How can this be when the rakyat under quarantine are subject to a different set of rules from that imposed on MPs?” Johari said at a press conference.

Datuk Mahfuz Omar (PH-Pokok Sena), who is Parti Amanah Negara whip, said the presence of the three MPs had exposed other MPs to the risk of infection.