Barge with gravel stones detained by MMEA in central Sarawak.

MIRI: The Malaysian Maritime Enforcement Agency (MMEA) seized a barge carrying 3,500 tonnes of gravel and a tugboat off the coast of central Sarawak.

A MMEA enforcement team also detained six crew members aged between 20 and 65 on the tugboat after they were found to be transporting the cargo without port clearance permit.

The case was uncovered during a patrol round off the coast of central Sarawak on Sunday (Dec 13) evening.

MMEA Tanjung Manis enforcement head Mohd Aziz Kassim said the barge being towed by the tugboat was detected off the coastal village of Belawai around 4.30pm.

"A check found that there were six crew members on board. Two are locals while four are Indian nationals. They were transporting the gravel from Kuching to Sibu," he said in the MMEA Sarawak updates.

The cargo and vessels have been towed to Tanjung Manis port pending a further probe. 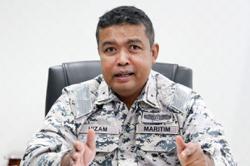