Findings of police probe into Adib's death to be known soon, says Hamzah KUALA LUMPUR (Bernama): The findings of police investigations into the cause of death of firefighter Muhammad Adib Mohd Kassim (pic) will be announced soon, the Dewan Rakyat was told.

He said this when winding up debate on the Supply Bill 2021 at the committee stage for the ministry on Monday (Dec 14).

Muhammad Adib, 24, who was a member of the Emergency Medical Rescue Services unit from the Subang Jaya Fire and Rescue Station, sustained serious injuries during a commotion at the Sri Maha Mariamman Temple in USJ 25, Subang Jaya on Nov 27,2018.

He died on Dec 17, after 21 days at the National Heart Institute.

On Sept 27 last year, the Shah Alam Coroner's Court ruled that the fireman’s death was the result of a crime committed by more than two or more unknown persons. - Bernama 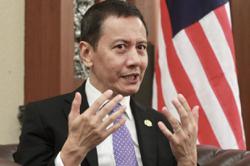