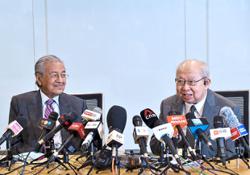 The two said they are ready to form a "unity govt" if the Budget fails to be passed.

The duo said that they are not working with the opposition Pakatan Harapan or any Umno MPs who are being tried in courts.

"You can call it 'unity government' if you want to. If I have enough votes, I do not mind being the PM," said Dr Mahathir.

"We have discussed to find ways to return as a progressive country again. We realise that our country has too many problems ....

“All of those in the government are (in it) for their own political gain and big salaries.

Dr Mahathir said that he is not working with opposition chief PKR president Datuk Seri Anwar Ibrahim as “Anwar does not talk to me”.

He also said he will not want any MPs who are facing court cases such as former premier Datuk Seri Najib Razak or Umno president Datuk Seri Ahmad Zahid Hamidi to be part of the new government should they vote against Budget 2021 on Tuesday.

“They can vote against Budget 2021 but they will not be part of the new government, ” he said.

Although the duo repeatedly said that they are not offering themselves to be the next PM, Dr Mahathir said that if he gets enough support from the MPs, he does not mind becoming the next premier.

He argued that the rakyat is fed up with the politicking.

Tengku Razaleigh said that although he is an Umno MP, he is free to support whoever he wants.

"I am here sharing a platform with Dr Mahathir for the good of the country," said Tengku Razaleigh, who added that he will not take part in the debates for Budget 2021 and will not be voting for it. 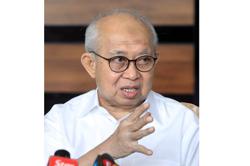