ALOR SETAR (Bernama): Kedah should not sacrifice its vast forest areas merely to be made water catchment areas for Penang to profit from, says Mentri Besar Muhammad Sanusi Md Nor (pic).

He said Sunday (Dec 13) that as such, the Penang Water Supply Corporation (PWSC) and the Penang government should pay water extraction charges for Kedah raw water sources so that the benefits can be shared mutually by the people in both states.

Sanusi said PWSC extracts 80% of its water resources from Sungai Muda every day, which comes up to 1.1 million litres per day (mld).

"The same charges, by right, should be imposed on PWSP which also extracts water from Sungai Muda, even though the extraction is done on the Penang border," he said.

Muhammad Sanusi said no one could deny that the source of Sungai Muda is from the Ulu Muda Catchment Area in Kedah.

He said the 163,000ha water catchment area requires sustainability, including no economic activities capable of affecting its geographical features and functions, to ensure adequate water supply to some 4.06 million people in Kedah, Perlis and Penang.

Sanusi said it was time for a review of the Kedah and Penang (Alteration of Boundary) Act 1985 as the need for water supply and development, as well as sustainability, to preserve water resources has increased.

"The (1985) agreement reached was to 'ensure water supply from Ulu Muda located in the state of Kedah' and the guarantee only means to guarantee water supply to Penang, not a guarantee of free raw water forever," he said.

Sanusi said when there are costs for the maintenance of resources, it is only right that they are also borne by Penang by virtue of being a beneficiary.

"What more when factoring in how the opportunity costs involved in the preservation of the Ulu Muda catchment area has been increasing, ” he said.

Both states are now embroiled in an issue over raw water with the Kedah government claiming that Penang had never responded to its demands for RM50mil annually for raw water drawn from its (Penang) side of Sungai Muda, which flows from the Ulu Muda catchment area in Kedah. - Bernama 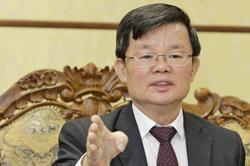