Umno refused to give exco positions to DAP, says Nga

IPOH: The forming of a new state government was not possible because Umno had refused to offer state executive council positions to DAP, Nga Kor Ming (pic) has claimed.

The Perak DAP chairman said after a series of negotiations between DAP and Umno, the latter made many offers, including exco posts to only PKR and Parti Amanah Negara.

“There was a series of negotiations carried out between us (DAP) with Umno shortly after our (respective) audience with Sultan Perak Sultan Nazrin Muizzuddin Shah.

“Although Umno made many offers to Pakatan Harapan parties, they excluded DAP. Had we (Pakatan) accepted the offers, Pakatan in Perak will break up.

“Pakatan took a stand and told Umno that we only stand together as a bloc or there will be no deal, ” he said in a statement yesterday.

The Perak political crisis was triggered on Dec 4 when Datuk Seri Ahmad Faizal Azumu lost his majority in a confidence motion mooted by Umno at the assembly sitting.

In the following days, Perak political leaders were summoned for an audience with Sultan Nazrin, with Umno president Datuk Seri Dr Ahmad Zahid Hamidi being among them.

“We in Pakatan have stood by our principles and not suffered any loss.

“The people will be able to see that Perikatan and Umno only focused on their personal interest rather than the people’s welfare, ” Nga added.In the 59-seat state assembly, Umno holds 25 seats, Bersatu five, PAS three, Gerakan one and Independent one. The Opposition holds 24 seats – DAP (16), PKR (three) and Amanah (five). 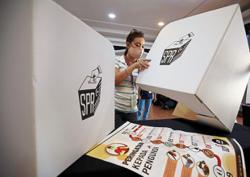