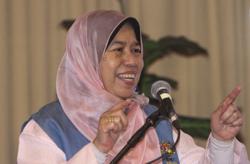 PETALING JAYA: The East Coast Economic Region Development Council (ECERDC) is committed to boosting economic growth in the western parts of Pahang through agriculture and tourism due to its proximity to the Klang Valley.

In a statement yesterday, ECERDC said it was confident that strategic infrastructure projects such as the Central Spine Road (CSR) has the potential to unlock new growth areas and stimulate the local economy with its expansive land connectivity, linking Pahang Barat to other economic hotspots in the country.

“ECERDC is actively working with Federal and state governments, as well as investors to enhance development progress in the East Coast.

“There is a need to invest in strategic infrastructure such as roads, which is key to attracting quality investments into the agriculture and tourism sectors, ” said Baidzawi Che Mat, ECERDC chief executive officer, after the ECER Implementation and Coordination Committee (ICC) meeting yesterday.

Pahang Barat comprises the districts of Bentong, Cameron Highlands, Raub, and Lipis, with Jerantut and Bera included as Pahang Barat Plus.

ECERDC said these districts collectively have vast tracts of land to attract investments in high-value agricultural activities such as livestock, durian, tongkat ali, as well as scenic destinations, including the highlands which could be further developed for tourism.

Under the ECER Master Plan 2.0 (EMP2.0), ECERDC said it aimed to attract RM31bil in private investments to Pahang by 2025.

They said Pahang had secured RM9.5bil in domestic and foreign investments between 2018 and 2020, with RM1.83bil focused on tourism, real estate and agriculture in Pahang Barat.

After the meeting, there was an exchange of loan documents between the Federal Government, Pahang state government, and ECERDC for the construction of water distribution pipes from Kemaman, Terengganu to Gebeng, Pahang for the Gebeng Industrial Area, which will span some 29km.

“We would like to thank the Federal Government for its support. This water distribution pipeline project is critical for existing industries. “It will not only fulfil current water demands for the industrial area, but will also help retain and serve as a catalyst to draw further investments and development in Pahang, which in turn will benefit the rakyat by improving their economic opportunities and livelihood, ” said Baidzawi.

The construction of the water pipeline will start by next June and is expected to be completed by December 2022.

ECERDC said it was working with private investors to further develop the dairy industry in Pahang Barat to replicate the success now seen in Muadzam Shah.

Chegar Perah has been identified to be developed as the largest commercial tongkat ali farm in Malaysia, with 13,000 tongkat ali trees to be planted by the end of the year.

ECERDC added that it was focused on creating sustainable attractions, including a Malayan tiger trail tourism development.