DAP veteran Teng explains why he plans to retire from politics, cites 'lack of space' to express his views

PETALING JAYA: DAP veteran leader Teng Chang Khim has revealed the reasons for his impending retirement from politics, citing a lack of space for him to express his views and that the party is focused on only superficial "skin-deep" reforms.

In an exclusive interview with Sin Chew Daily published Friday (Dec 11), the Selangor executive councillor, who has served 25 years as a DAP assemblyman, said many of the party’s plans emphasised reforms but were impractical and not result-oriented.

"This is especially true on addressing sensitive issues. The attention was on skin-deep measures and lacked focus on how to implement it (a policy) at a deeper level.

"There was a non-stop push for principles, fairness, reasonableness and transparency. But what about practical progress?” he asked.

During the 90-minute interview, the veteran politician admitted that he was tired of playing the role of an "opposition” member in the party and that not many were willing to accept his views.

"When no one opposes a proposal in the party, and you’re the only one who does every time, it becomes tiring.

"I’ve been an opposition member in the Selangor state assembly for 12 years before getting a chance to be part of the government.

"But within the party, I’m always playing the role of an ‘opposition’, ” he said.

The Bandar Baru Klang assemblyman, who has served on the party’s central executive committee (CEC) for the past 24 years, said true reform within the party was only possible if they were able to deal with Lim Kit Siang and his son Guan Eng, who are the party adviser and secretary-general respectively.

He chided other members in the CEC who remained silent, even though they yearned for reform, saying that his retirement could perhaps force other leaders to start reflecting on their roles in the committee.

"No one wants to play this role (of an opposition) anymore.

"If the party wants reform, you must first reform yourselves; you must do it with your own strength, ” he said.

Teng pointed out that the party has to start listening to and accepting the diverse views of its members, adding that the coming CEC election would be important in determining if this happens or not.

"My strained relationship with the Lim father and son is an accumulation of many things, and not because of just one issue.... It’s hard to explain everything, ” he said.

On the upcoming CEC election, Teng predicted that deputy chairman Gobind Singh Deo would be the next secretary-general, even though Anthony Loke and Nga Kor Ming were touted to be the favourites to win the prominent post.

"Gobind will not be a ‘dark horse’; he is actually the ‘leading horse’, ” Teng said.

As for who will be the next chairman, Teng said it would most likely be Guan Eng due to his wide influence and support.

Teng thanked Tan Kok Wai, who he said has made it clear that he will step down as the national chairman, for telling the press that he wanted Teng to stay.

None of the top leaders, however, have contacted him to ask him to remain in politics, he added.

"It is unexpected yet I am not surprised.

"Right now, I feel relaxed. Whether they ask me to stay or not is not important anymore, ” he said.

According to Teng, many grassroots members admired his bold and say-it-as-it-is personality and had pleaded with him to stay.

"It is not right for members to put all their hopes on me alone to continue to play the role of someone who speaks his mind, ” he said.

Asked what he would do after retiring, Teng said he would continue to support the party behind the scenes as an ordinary member.

On Dec 3, Teng, a DAP member for 30 years, announced on Facebook that he would step down from politics once his term as assemblyman ends in two years’ time.

He added that he would not seek re-election in the upcoming CEC polls.

He was first elected as the Bukit Gasing assemblyman in 1995 before representing Bandar Klang in 1999 till today.

His constituency had its name changed to Sungai Pinang and later to Bandar Baru Klang. 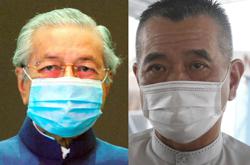