GEORGE TOWN: Confusion reigned among residents in two areas placed under the enhanced movement control order, with dozens thinking it is still business as usual.

Many were turned back at checkpoints during the first day of the enhanced MCO yesterday.

A man, known only as Lee, was told to return home after being stopped at Persiaran Paya Terubong near Relau.

“Nobody told me we are not allowed to leave the lockdown area.

“My employer will take action against me for not turning up, ” said the 50-plus security guard, who lives in one of the flats in Paya Terubong placed under targeted enhanced MCO.

Another resident, S. Selvi, 46, thought she could still go out to buy essential items like food.

“I was surprised when most of us were asked to turn back, ” she said.

It was earlier reported that the Jalan Paya Terubong flats and Desa Bistari Apartments would be placed under enhanced MCO from yesterday until Dec 20.

Jalan Paya Terubong covers an area of 2.4sq km, involving 10,000 residents in 13 apartments and condominium blocks with 2,730 units, while Desa Bistari Apartments in Batu Uban cover an area of 800sq m with around 2,000 residents.

There are two police roadblocks at the Jalan Paya Terubong flats and one at Desa Bistari Apartment.

A check by The Star saw the security personnel busy explaining to residents that they must stay home.

He said as a caring government, they would continue to assist those in lockdown areas and sub-districts 12 and 13.

“For those who want to help with contribution of food essentials, we have a control system and will consider any application from non-governmental organisations that want to help, ” he said.

Jagdeep said state assemblymen in areas where enhanced and conditional MCO were enforced should ensure the people’s well-being was taken care of. 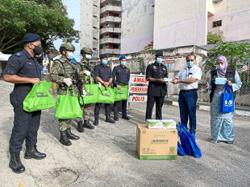 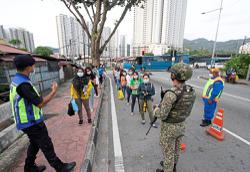