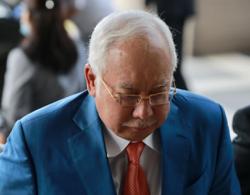 PUTRAJAYA: The Federal Court here has dismissed a review application by former police commando Azilah Hadri, who is seeking a retrial in the murder case of Mongolian Altantuya Shaariibuu.

A five-man bench of the apex court, led by Chief Judge of Malaya Justice Azahar Mohamed, unanimously dismissed the application on grounds that there was no miscarriage of justice in Azilah’s trial at the High Court.

The judge said the applicant’s grounds of review was that he (the applicant) had submitted further evidence - in the form of a statutory declaration (SD) - which was not used in his trial at the High Court.

In the SD, the applicant claimed to have conducted the act of murder on the alleged instruction of a third party.

“Now, it must be emphasised that he kept silent about this so-called new evidence during the investigation, during the trial at the High Court, at the appeal at the appellate court, as well as the Federal Court.

“This so-called material evidence which was available during the trial was deliberately suppressed by the applicant himself. He himself withheld the so-called evidence from the police, his lawyer and the courts.

"Clearly in our judgment, the introduction of so-called new evidence is not in accordance with established legal principles," Justice Azahar said.

The court also said that the finality of a legal proceeding was of fundamental importance in criminal justice, and there should be no further appeal after the Federal Court.

The court, therefore, has no power to reopen, to rehear, to reexamine the decision it made dated Jan 13,2015, save for its review power pursuant to Rule 137 of the Rules of the Federal Court 1995.

However, Justice Azahar said the applicant has not shown that there was injustice in his case.

“There was no grounds to say there was a breach of natural justice. There was no miscarriage of justice.

“In our judgment, there were no exceptional circumstances that could call for a review under Rule 137.

“We, therefore, dismiss this review application, ” he added.

On Dec 5,2019, Azilah filed the review application, together with his 32-paged statutory declaration in which he claimed that the order to kill Altantuya came from former prime minister Datuk Seri Najib Razak, who was deputy prime minister then.

The 43-year-old was seeking to set aside his conviction and death sentence by the Federal Court on Jan 13,2015, and an order for a retrial.

Najib filed a motion at the Federal Court to be named as intervenor in Azilah’s review application on grounds that the SD contained serious allegations against him, but this was dismissed by the apex court.

The Federal Court said the outcome of the review application would not have affected Najib in any way, as he was not prosecuted nor accused of the crime.

Azilah and another former police commando Sirul Azhar Umar, 47, were convicted and sentenced to death by the Shah Alam High Court in 2009 for Altantuya's murder at Mukim Bukit Raja in Shah Alam between 10pm on Oct 19 and 1am the following day in 2006.

They were, however, discharged and acquitted by the Court of Appeal in 2013, which allowed their appeal to set aside their conviction and death sentence.

In 2015, the Federal Court overturned the acquittal of the two police commandos and restored the High Court decision that found them guilty of the offence.

As a death row inmate, Azilah could still petition for clemency to the Pardons Board for his conviction in the murder of the 28-year-old Mongolian.