Pfizer will bear the logistics cost for the Covid-19 vaccine, KJ tells Parliament

KUALA LUMPUR: The logistics cost of the ultra-cold Covid-19 vaccine will be borne by the pharmaceutical company Pfizer, says Khairy Jamaluddin (pic).

The Science, Technology and Innovation Minister said the deal signed with the pharmaceutical giant includes the shipment of the vaccine.

"There are deals, like with Pfizer where the cost we have paid (for the vaccine doses) consists of transportation costs, which is borne by Pfizer.

"The deals on (logistics cost) varies and it depends on the different companies.

"The final cost of it all is being looked at because it does not only involve transportation but also storage so we will scrutinise it when we get a clearer picture," he said in reply to Fahmi Fadzil (PH-Lembah Pantai) who had asked on the government's preparations to receive the vaccines and the additional costs involved for logistics on top of the RM3bil allocations announced.

Fahmi had also asked about the government's preparedness if there is a disruption in the supply chain for the vaccine, such as the one experienced by Pfizer currently.

Khairy said he is aware of media reports on the challenges in Pfizer's supply chain for raw materials used in its Covid-19 vaccines, which caused the company to slash its production target for 2020.

"But the same report also says it's only for this year. I was informed by Pfizer that this does not affect the supply for next year, which is for Malaysia.

"However, Malaysia, like other countries, have taken the portfolio vaccine approach to ensure we have enough supply.

"If we only depend on one company, then it may open us up to risks in securing enough vaccines," said Khairy.

In a Reuters report on Dec 4, a Pfizer spokeswoman said the company anticipates to produce 50 million doses of its Covid-19 vaccine this year.

This is down from an earlier target of 100 million doses.

Khairy said Malaysia is targeting for 70% of its population to develop herd immunity under the national immunisation plan for Covid-19.

Thus far, Malaysia has signed two deals which have secured enough of the vaccine for 30% of the population.

Khairy said one is through the Optional Purchase Arrangement signed on Nov 23 which guarantees a vaccine supply for 10% of the population.

The second deal is with Pfizer, which was inked on Nov 24 to provide the vaccine supply for 20% of the population, or 12.8 million doses.

"For the remaining 40%, the government is still in discussion and negotiating with other pharmaceutical companies that are also developing the Covid-19 vaccines," said Khairy.

The Rembau MP said the government targets the first quarter of 2021 to receive its first batch of Covid-19 vaccine.

"However, the government will not compromise in terms of safety and efficacy of the vaccines procured.

"The final decision on the usage of a vaccine will only be done after a registration and approval decision is made by the National Pharmaceutical Regulatory Agency (NPRA) under the Health Ministry," said Khairy. 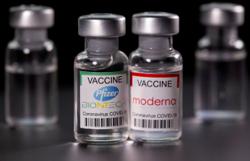