Teenager saved by friends who 'bash' crocodile into submission

TUARAN (Bernama): A teenager was saved from being eaten by a crocodile after six of his friends "bashed” the reptile, injuring one of its eyes, at Sungai Kampung Mengkabong here.

He said the 1.52m long crocodile attacked the group of children, aged between nine and 16, when they were looking for clams and river snails while trying to cross the river.

"They quickly attacked the crocodile with whatever they had in their hands until one of them managed to injure the crocodile’s eye, forcing it to release the teenager,” he said when contacted by Bernama on Friday (Dec 4), adding that the victim’s house was near the mangrove river.

He said the victim, who is being treated at the Tuaran Hospital, would be referred to the Kota Belud Hospital or Papar Hospital for further treatment. - Bernama 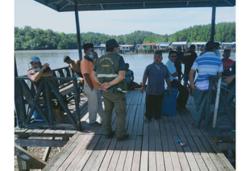