IPOH: Perak Mentri Besar Datuk Seri Ahmad Faizal Azumu (pic) says he will submit his resignation letter once the Sultan of Perak gives the mandate for the appointment of a new mentri besar.

"Until an assemblyman proves of having the majority mandate in the state assembly, and the mandate is received by the Ruler, I will then resign to ensure a smooth transition.

"Right now I am the caretaker Mentri Besar, as the daily operations of the state government must go on," he said.

Faizal said that Parti Pribumi Bersatu Malaysia (Bersatu) members will make a collective decision on the support for the new Perak state government.

He said this when asked about the current political turmoil of the state, whether any of the party members would be making their own decisions on the support for a new Mentri Besar.

"Whatever decision is made, it will be done in a consensus manner, as I am confident with the discipline of the members, including from one Independent candidate, and one Gerakan member.

"While making a decision, we will also think of the joint interest of our friends in the Perikatan Nasional government," he told reporters after presenting RM100,000 each to nine Chinese independent schools (Suwa) in Perak at his office on Saturday (Dec 5).

Faizal, who is also Chenderiang assemblyman, lost the motion of confidence in support of him as the mentri besar during the state assembly sitting on Friday (Dec 4).

Of the 59 assemblymen, Faizal only got 10 votes in favour while 48 voted against him, with one abstention.

On Umno secretary-general Datuk Seri Ahmad Maslan's statement that the Perak state government still stands, and the current state exco lineup must be continued, Faizal said there were needs and desires in any political party, be it, in Bersatu, Umno or PAS.

He said 'needs' is important to ensure an establishment of a stable government, thus the desires must be sacrificed.

"The exco lineup is operating as normal, including two exco members from Bersatu, but when the time comes then the party will also discuss the needs and desires (keperluan dan kehendak)," he added.

Faizal also said he was upset as he was unable to present the state Budget during the sitting, as there were many goodies offered, including for the civil servants. 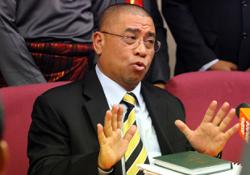