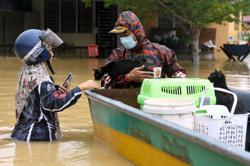 KUALA LUMPUR (Bernama): The number of evacuees in Kelantan and Pahang has continued to rise while the flood situation in Terengganu is slowly improving.

The number of evacuees in Kelantan rose to 323 people at 5pm Friday (Dec 4) compared with 283 in the morning.

The Social Welfare Department (JKM) disaster information website said Tanah Merah and Pasir Mas were the latest districts to be affected by floods after Kota Baru and Pasir Puteh with 11 temporary relief centres opened compared with nine on Friday morning.

Eight evacuees from two families are placed at the centre at SK Kubang Kual, Pasir Mas while in Tanah Merah, 12 people from three families are housed at the Balai Raya Padang Kijang relief centre.

In Kota Baru, 84 evacuees from 17 families are housed in three evacuation centres, with Pasir Puteh recording the highest number of evacuees with 219 individuals.

The increase in the number of flood evacuees is due to the downpour since Thursday (Dec 3) morning.

According to the Department of Irrigation and Drainage (DID) website, the water level of Sungai Golok in Rantau Panjang was above the danger level with a reading of 9.26m, but was on a downward trend as of 5pm Friday.

In PAHANG, the JKM disaster information portal reported that five relief centres were opened in Raub as of 4pm, housing a total of 109 people from 34 families, compared with 55 evacuees from 19 families on Friday morning.

SK Ulu Sungai was the centre with the most number of evacuees with 42 people from 11 families from Kampung Sungai Ulu.

Checks conducted by Bernama in Raub revealed that while the floods that began in the early morning had started to recede, evacuees were advised to remain at the evacuation centres as a precautionary measure due to continuous rain and to avoid having to evacuate a second time.

Meanwhile, the DID website reported that Sungai Lipis in Batu Malim, which bursts its banks and caused floods in Raub, recorded a water level of 114.61m at 4pm compared with its normal level of 113.2m. It has shown a downward trend when it was at danger level on Friday morning.

This is following the closure of 18 relief centres, bringing the current total number of centres to 58 compared with 76 on Friday morning.

Terengganu disaster management committee secretariat chief Lt Col (PA) Che Adam A Rahman said the district with the most closure was Setiu with 12 centres, followed by Besut (three) and one each in Dungun, Kuala Terengganu and Kuala Nerus. 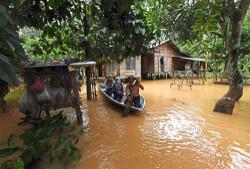